Well I have never had sexy time with a smurfette.

Yes, we are just back from seeing ‘The Festival’ with Joe Thomas out of Inbetweeners playing very much the same character and even having the same person play his girlfriend in the film as she did in Inbetweeners. Very funny and gets a Boblog Feelgood Film Factor of Five (I have no idea if that is a high score but the alliteration needed it). Remind me never to get my nipple pierced.

Bit of a filmy period this as me and Bob Junior (female) went to see the Wasp woman film with the little ant fella in it. Really enjoyed that. Better still the cinema has reclining seats so you can go up and down and annoy everyone when you get a spare moment.

The Pied Piper came over to ours for his food earlier this week. As ever I am using a false name to protect the innocent. He has just turned 60 and has a beard that scares small children. Whilst his company was charming (ha ha) he brought up a word I had not used before. Batik. Now as you know, batik is a technique of wax-resist dyeing applied to whole cloth, either by drawing dots and lines of the resist with a spouted tool called a canting or by printing the resist with a copper stamp called a cap.

The name was derived from John the Baptist (the Jewish itinerant preacher in the early first century AD) who worse robes with patterns which he made either by drawing dots and lines of the resist with a spouted tool called a canting or by printing the resist with a copper stamp called a cap. Here is a rare early colour photograph of JtB in one of his dowdier numbers. 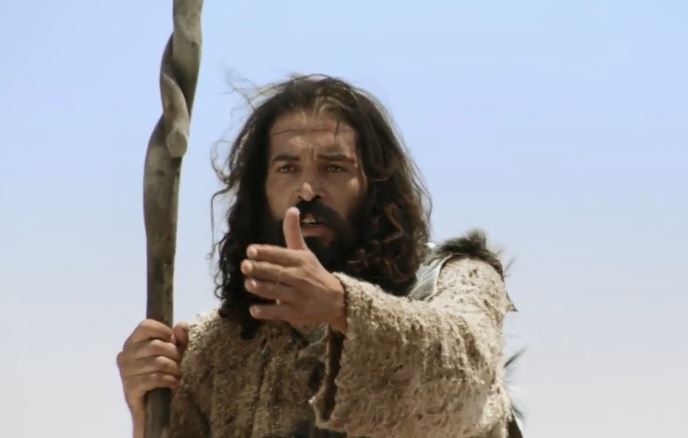 Why are you sharing this Batik information with us Bob (as fascinating as it is)? No reason to be honest.

We got onto Batik as I had given The PP a belated 60th birthday gift of a picture which is meant to show the history of electronic music in a circuit-board like style. The thing is I still don’t get it; why is George Harrison on there? Why are The Clangers missing and have they edited out Rolf Harris and his stylaphone? I can do a bit of Beastie Boys, the odd touch of Kraftwerk and then give me some Vangelis anyday but the rest sounds like bleeps. Idiots.

Failing to use a perfect link earlier, I should have gone from the film ‘The Festival’ to the fact that Bob Junior (male) is at Reading Festival for the first time. Chuffed for him. I spent most of my 20s and early 30s gigging until the children ruined my spare time and bank balance (only joking kids, I blame your mother more). Only joking wifey, it was the fault of our offspring. Oh just argue amongst yourselves. Anyway I didn’t recognise the bands playing. The few I did didn’t float my bloat. Yes, bloat.

Talking about bloat, I said I would go back to Slimming World this week but at the last minute decided one last self-help attempt with a public weigh-in shaming at home and a food diary. The latter is fun actually as it is like a tasty story book without the pictures. The best way to see how chubby you have got is apparently to stand naked in front of a mirror. I did it differently this week.

So occasionally I sleep in the Bobcave with the dogs. Like posh camping.

The other night I got back from beers with Stewart Lee and decided to have a night with the pooches. Now I went in my clothes down there, damp underfoot due to rain that day. Stripped down to my undies for the night I realised the dogs were in the garden. No rush, so I went to sit in the canvas chair in front of the Bobcave. Bad move. Filled with rainwater and pants soaked.

So, put trousers on and get dog or go au naturelle? Yes, I held my hand in front to cover my blobesty, but as I ran back up the garden with a dog under each arm I did wonder whether any poor unsuspecting neighbour happened to be looking out of their window into the gloom at that very moment as my chiselled Twin Cheeks vanished into the distance. I slept well.

Now talking about flesh, on a dog walk with pals Jim and Muscles earlier we got onto being burnt at the stake. I said it would be torture for me as I would be dying in agony whilst also getting hungry as I smelt the sizzling Bobfat. Bob Roast could feed a large family for a month.

Now my tastebuds are going, we had a lovely meal at Dishooms just off Carnaby Street last night as an early retirement farewell for The Sergeant. Within half an hour I had spilt curry down my front and my wine. Yes, I drink wine with curry as I am cultured innit. Dishooms is pricey but worth it once in a while. The one near King’s Cross (Granary Square) is well worth a visit. Last weekend me and the female Careys went to our local sushi place, Onami. Brilliant but even now I still make the schoolboy error of coating my sushi in too much wasabi and then being unable to see.

Can’t see? That may be a useful attribute if you are watching Stockport County this season. Now I have not seen them yet so I can only go on fan chat but losing 1-0 at home to Alfreton today (Stockport population 136,000; Alfreton 25,000) sums up how crap we can be. I hope Clapton FC are better next Tuesday. Me and the pied Piper got to see West Ham lose at home to Bournemouth last weekend thanks to free tickets from Jim. Now Chloe – real name now – has had more of a football success. On top of her sparkling football journalism, she has now appeared as a panellist on the one hour Radio 5 European Football Show. From Stockport to Firenze. A true football hero(ine).

Still not managed my Corfu Summer Special blog yet and it is nearly September. Our only evening activity apart form strolling to the restaurant or occasional cocktails, was playing Uno. Whilst I was not the ultimate winner I voted myself the player with the most panache 14 nights running. We also played some great games of Zombie Bob and also Rice Baby. Best meals in Corfu? Well it was the Stifado I reckon closely followed by the lamb chops and the fresh sea bream.

Best Island trip was Paxos. Or was it Anti-Paxos? Which came first? Apparently – and this is true – Paxos became a centre of feuding between two families and the one that lost decamped to the smaller island of Discos nearby which, die to their antipathy with their neighbours, they renamed as Anti-Paxos. If you don’t believe me, ask your Gran.

Now obviously I am biased – it is Bob Junior (male) after all, and his three mates, but check out the WHAM You Tube stuff below – if you like it, subscribe….

Yet again, lots of words, but no point whatsoever. As pointless as the Abba lyrics, ‘I have a dream, a song to sing’. I mean what does that even mean? My dad used to play bongos in Abba. Truth.